This is just a little overview, not a complete review of the book since it’s based on a movie, most people already watched and there’s no real point discussing many points of it, anyway I thought I could share what I liked about the book a bit. 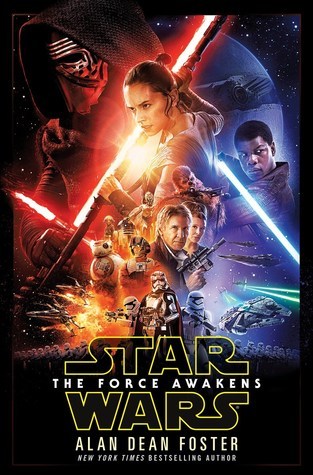 Summary: Set years after  Set years after Return of the Jedi, this stunning action-packed adventure rockets us back into the world of Princess Leia, Han Solo, Chewbacca, C-3PO, R2-D2, and Luke Skywalker, while introducing a host of exciting new characters. Darth Vader may have been redeemed and the Emperor vanquished, but peace can be fleeting, and evil does not easily relent. Yet the simple belief in good can still empower ordinary individuals to rise and meet the greatest challenges.

Overview of the book:

Since the book is almost the same as the movie, there isn’t much to talk about it, mostly without spoiling anything … I know it may sound weird, but I know a bunch of people that want to but haven’t watched the movie yet, and I’m sure they aren’t the only ones.

The thing I did like about the book is actually the fact that it is so much as the movie, and I say it’s much like the movie because the book actually has some ‘deleted scenes’ about Poe, some details were added,  a scene that explains this;

As well as some conversations that weren’t in the movie were included and some others were expanded. Also my favorite, the characters’ thoughts in many scenes that cannot be shared in the movie. Honestly, why do people think watching a movie is just the same as reading a book?

And even as I am saying this, I still really hope the  Blu-ray comes with some deleted scenes like the ones in the book.

The thing I liked the most about the book, thou, was the fact that the writer did such a great job describing the scenes, reading it felt like rewatching the movie again, only for a while longer than the two hours in the theater.

Anyway, in my opinion, the book can help us get through while we are waiting for the Blu-ray to come out in … no release date yet? Are you freaking kidding me???