About seven months ago my sister and I moved to this new apartment. To be honest, i wasn’t sure i wanted to move here, but we were running out of time to find a new place so we took it.

We never thought we could have so much trouble with our neighbors… let me explain.

We have a dog, a little own, that apparently believes he is a lion or something, although he clearly isn’t. The biggest problem with him is that when he is alone at home he barks for a 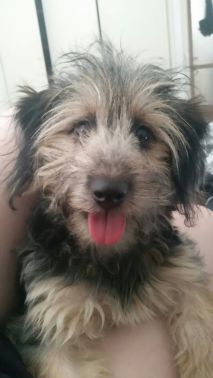 while, we tried to figure it out, and found out he cries sometimes for about half an hour, an hour.

Afraid and sort of angry  we took him to a training class. The problem with this is he thinks he is the alpha, and he does what he wants. We finished the training but it didn’t work.

So we kept trying to leave him with stuff to play with when he was alone.

A few weeks ago my sister traveled to Argentina and i was left with the dog by myself. I wanted to be able to take him to walks and all, so i tried working only mornings, but my mornings start about 6:00 am and  had to leave early. This apparently annoyed my neighbors, but no one said a thing until two weeks later, in which i though everything was okay.

The moment my neighbor told me about my dog bothering them in the early mornings i changed my schedule so it wouldn’t bother them, i started working evening although it was more difficult to me to take my dog out and all. Anyway they complained and sent the municipality to come and check if my dog is legal. Because i do care about my dog, and he i legal,  the municipality guy told me there’s nothing they can do.

Clearly when he came someone was waiting downstairs, i’m guessing the neighbor that doesn’t like us. Because you see, i totally believe the problem is not just the dog but they have something against us, because they seemed to hate us even before the problem with Chobi, my dog, started. they are just enjoying intimidating us, because they always complain even when he is quiet… every time they see us they tell us something mean or look at us angrily.

Since i can understand that my dog is annoying people, and because my sister always works mornings, like early 4am mornings, i decided that even though i tend to be more depressive when i work evenings, i’ll only work evening so our dog won’t bark at 5am, bothering our neighbors.

But it’s never good enough, because when this weekend i went visit my parents an  y sister left for work, someone, annonimusly left us a letter saying that if we don’t get him to shut up they’ll call animal services so they can take him from us.

Here’s a catch, they left in the letter a recommendation for a barking control collar which is this device that will electroshock the dog whenever he is barking so he will shut up, but now a new dog is our neighbor and everytime he sees our dog he barks too, now who’s to say he doesn’t bark when he is left alone at home? what if they keep blaming my dog for the barking?

Anyway, i’m so tried of all the intimidating they are doing to us. I’m seriously contemplating leaving work and staying home so Chobi won’t cry when we are away.

You see, they scared me, i don’t want peole taking away my baby, he is like a son to me, i love him more than anything…. And to be completely honest, i don’t want to have to shock him every time he barks, because it will hurt him, but apparently i’ll have to. I just wish they could understand what are they making me do to my baby, for me he is likeif he was a human son.

I hope it will be okay, i’m so sorry i have to do this to him.

One thought on “Having Neighbor Problems.”