it’s Saturday and it’s Tag Time! Yaaaaaaaaay! I love these tags, don’t you? So today i’m doing a really cool one, the Bohemian Rhapsody Tag, based on the song by the great band that was/is/will forever be QUEEN.

As usual, i would want to give credit to the creator of the tag, but i didn’t have the time to research for them, so please, if you know who created it, please let me know so i can give them full credit for it!!

1.) Mama, just killed a man – A fictional character’s death that really upset you

Okay, so i hope this isn’t coming as a shock to anyone here … but in case you haven’t read Harry Potter and the Order of the Phoenix, skip ahead to the next question.

The character’s death that upset me the most, each and every single time i read the book or think of it is Sirius’s death. Like, the man escaped, sure… but he was never really free. It’s so sad, that the moment he might be able to show the world he wasn’t Voldemort’s follower never came. That the only time he went out of the house he died… it’s… it was the worst.

Okay, there’s a death more upsetting than this one, i just… i don’t talk about it.

2.) Carry on, carry on – A book that was hard to keep reading but worth it in the end

We had a difficult start, i thought i would never be through with it but at some point, the book became incredibly interesting and i couldn’t put it down, like seriously i’m so happy i didn’t give up on it, because now is one of my favorite books of all time.

3.) Sends shivers down my spine – A book with a beautiful spine/cover 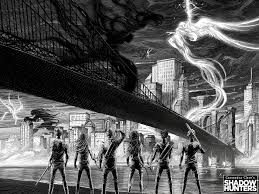 The new covers of The Mortal Instruments and The Infernal Devices are breathtaking and so are the freaking amazing spines they have, like seriously, i’ve been putting aside money for a while now so i can buy them.

4.) Goodbye, everybody; I’ve got to go – A book you couldn’t finish

I feel like i’ll be bashed because of it, but i never finished reading  The Throne Of Glass, i tried, more than once or twice, it just… the book just isn’t for me.

House of Leaves is one of those books that everyone who talks about it says it’s really a creepy reading and scary, so obviously i really want to read it, because i love being scared so much (is it a weird think to enjoy?)… anyway, i still, everytime i open the book i just start thinking about how i won’t be able to read it at night, and what if it gives me nightmares and such and then i close it and say i’ll read it another time.

6.) Bismillah, no!/We will not let you go – A book/series you wish there was more of

So, it already has six books but, i really want to read more about the characters from The Mortal Instruments, like, i really enjoy the fact that there are other installments with different characters, but i really miss the original gang… to say i even miss Jace, and i don’t even like him… okay, the one i miss the most is Magnus, because he is everywhere but not enough… anyway, i want more shadowhunters’ chronicles but around the New York Institute.

7.) Mamma mia, mamma mia – A book/series which should be made into a musical

Mmmm… this is really difficult, i wish every single one of them was a musical, to be completely honest… but if i had to choose just the one i’ll say Half Bad.. i have many ideas for the songs in the musical itself, i’ve been writing that stuff for more than six months now… that could be really awesome.

8.) The head banging bit – A book that made you facepalm

The first two books (the only ones i read) of the Lux series… i cannot exactly explain why, but i felt like facepalming myself all the time, that’s why i haven’t finished the series yet.

9.) Oh baby, can’t do this to me, baby – A moment from a book when it felt like the author was being mean to you

I don’t know like sometimes i feel betrayed, but at the same time i know it was the right thing to do, so i don’t have any complainings about the authors… or at least i can’t recall any right now.

10.) Nothing really matters – which character(s) did you not care about?

I’m always saying this… people might think i’m insane by now but…. i don’t like the Herondales, yep, i said it, once again. Okay, so that’s not completely true, there’s this lost Herondale that i think i might like, but Jace, James, and Will? No, thank you. Honestly, i just cannot see what people see in them so much….. if you can explain it to me, i’ll be forever grateful. Please don’t hate me though.

And that’s it… since i wasn’t tagged myself XD, i’ll just leave this to whomever may want to answer to the tag! it was a really fun one!!!

One thought on “The Bohemian Rhapsody Tag”