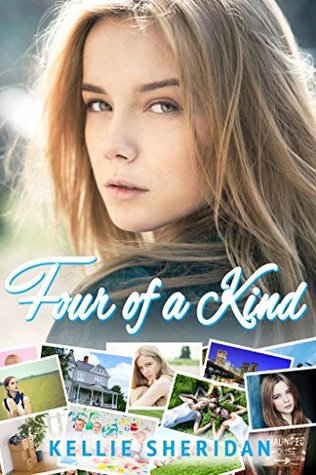 Four of a kind by Kellie Sheridan

Synopsis: The odds of giving birth to identical quadruplets: 1 in 13 million.

The population of Fairview, a town where all anyone talks about is the Fairview Four’s return after fourteen years: 47,327.

The chance of Reagan meeting a guy who sees her as one of a kind: better than she thinks.

Following in her sisters’ footsteps—and, all too often, their shadows—is nothing new to Reagan. But a disastrous first day at Fairview High forces her down a new path, one that could lead to seeing herself as more than just someone else’s sister. Things aren’t going as smoothly for Reilly, Reece, and Rhiannon though. How can Reagan let herself be happy—or dare to fall in love—when she may be the only one who can bring her family back together?

Now first of all; I received an e-copy of the book from NetGalley in exchange of my honest opinion.

The story begins as Reagan’s family is moving back to their place of birth, where they became a sensation when the four identical quadruplets were born. She was out the four the only one not as angry as the others for moving there and that was because in their previous city she was the least popular and now she could start anew.

Pretty soon we find out Reagan isn’t very special and that’s one of the things that she is afraid people finding out; that she and her sisters are actually boring.

As they get to the new home, the town’s journalist, her crew, and her son are waiting or them and then – the guy looks at her differently and tada! she gets a crush on him. Figures, the first guy she sees in the ‘new’ town.

The story is a simple one, a family finding their place in a ‘new’ town. The story centers on Reagan and how she successes on making new friends and having a group to rely on even an unfortunate event that happens on her first day in school. Soon she finds herself in a class she wasn’t expecting on attending to and her life suddenly is different.

I think the feelings were shown when she started to meet the new people and how she felt as she was being left behind because they all knew each other already and such felt very real. I really enjoyed the way she connected with most of the people in the group like it felt awkward and it slowly built.

The main problem i had with the story or more like with the characters was the idea of them being four. It felt unnecessary as their characters weren’t developed at all, their relationships weren’t more than superfluous, like having three sisters my age and them being such an important part of my life i would involve them more in it. I felt like their only connection was them being sisters, not real thoughts or many feelings. At moments it looked like it could go somewhere but then, the connection wouldn’t feel real.

I think the book lacked a little in the points of view of the other sisters, it would’ve been nice to know how they felt about Reagan too and their relationships. Though the end of the book made me believe there’s a chance for a sequel where another of the sisters was the main character. I really hope that.

As for the writing and the story it as a very easy going reading, it took me very little time to read it as i felt the words flowed very nicely. I liked the writing style though it felt a little juvenile, i actually believe it could speak to many teenagers and make them read it.

On the book you won’t find much drama, it is more than anything a happy reading, a great way to bring yourself up. I recommend it if you are looking for a slice of life kind of book.

And that’s pretty much all for nowmy dears, have agreat weekend!

One thought on “Four of a kind by Kellie Sheridan”