Trigger warning! This review is, yet again about a very sensitive topic, school shooting. I talked aboutsome books like this in my reviews of the books; [endgame] [This Is Where It Ends] [Forgive Me, Leonard Peacock]. Because i don’t know how critical this topic may be to many people, so i decided to warn you about it before i start talking. Please, if you know this is a difficult topic you don’t want to know or read about, move on, don’t read this. If you know you can handle the topic and you want to read my review, please go ahead.

I hope you make the right decision for yourself, 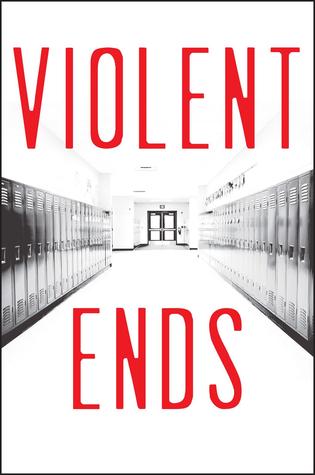 Synopsis: It took only twenty-two minutes for Kirby Matheson to exit his car, march onto school grounds, enter the gymnasium, and open fire, killing six and injuring five others.

But this isn’t a story about the shooting itself. This isn’t about recounting that one unforgettable day.

This is about Kirby and how one boy—who had friends, enjoyed reading, played saxophone in the band, and had never been in trouble before—became a monster capable of entering his school with a loaded gun and firing on his classmates.

Each chapter is told from a different victim’s viewpoint, giving insight into who Kirby was and who he’d become. Some are sweet, some are dark; some are seemingly unrelated, about fights or first kisses or late-night parties.

This is a book of perspectives—with one character and one event drawing them all together—from the minds of some of YA’s most recognizable names.

When a significant event happens at school it shakes everyone to their core. Kirby Matheson has come to school with a gun, shot six people and then killed himself. Now, from different perspectives of people around school, and especially around Kirby himself we’ll get to see a story develop in a way we didn’t expect to. Each chapter is written by  a different author, and each one tells a different side of the story  before or after the event itself.

This book, i’ve been trying to get it for a very long time. The book, it reads itself. Once i started reading i just couldn’t stop. The story being told from such different POVs makes the event very real. It’s not just one person telling how something went down but different people seeing the perpetrator before he committed the act and the aftermath of it.

I think the most powerful thing of the book is that we actually don’t ge to read about the events from Kirby himself, like so many times when the perpetrator kills himself, we are left with a lot of questions of why he did it. Yes, we learn a lot about him, and we can think of reasons ourselves, but there’s never just one reason.

The different writers made the story feel more real, each one of them being a different person and telling their story in a different way made it a unique experience. I really enjoyed it. Also, since each one felt different for some reason it made them more close to my as a reader. My personal favorite was Kirby though, there was so much to think about him through the book, his presence was very powerful (not  only because he was the perpetrator).

My favorite chapter was the one from *wait for it* the gun’s pov. Seriously, that was some inventive way of telling a tale. I never thought i’ll find such an interesting tale, for a gun. Showing how it was waiting for it’s moment to shine and how it *felt* when the time came.

The thing though about having so many writers is some of the chapters fell flat compared to others. Yes, most of the characters were very easy to care for, but many others, i couldn’t care at all. Also, there were some of the stories i wished were longer. The thing is i was left with the feeling of need more that the book gave me.

I won’t keep comment on the book because i really don’t want to spoil it for you. If you think you can take to read the story with such a topic, i recommend you read it. There are some graphic moments on the book, but they aren’t many and it isn’t extremely gory, and being such a book, it needs to have at least one comment on what happened when Kirby pulled the trigger.

In my opinion, the overall of the book is a very interesting share of experiences by people who even if they weren’t close to each other, they were scared by the same violent act, and how it changed each of their lives forever, some before the act itself and some after.

The topic is very well handled, being such a sensitive one. I think, it’s a book to read and think about, not only because it’s a good book, but because it makes you realize and rethink many things.

If you think you’re strong enough, give it a chance.