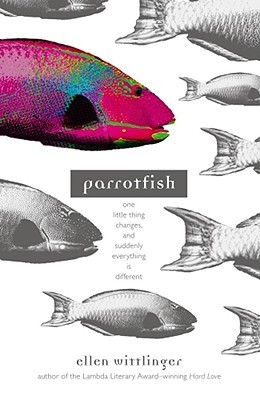 Synopsis: “Last week I cut my hair, bought some boys’ clothes and shoes, wrapped a large ACE bandage around my chest to flatten my fortunately-not-large breasts, and began looking for a new name.”

Angela Katz-McNair has never felt quite right as a girl. Her whole life is leading up to the day she decides to become Grady, a guy. While coming out as transgendered feels right to Grady, he isn’t prepared for the reaction he gets from everyone else. His mother is upset, his younger sister is mortified, and his best friend, Eve, won’t acknowledge him in public. Why can’t people just let Grady be himself?

Grady’s life is miserable until he finds friends in some unexpected places — like the school geek, Sebastian, who explains that there is precedent in the natural world (parrotfish change gender when they need to, and the newly male fish are the alpha males), and Kita, a senior who might just be Grady’s first love.

Okay, so this book. The story about a ftm trangender teenager that a just a few weeks ago came out to his parents as trans. Before that he came out as a lesbian and now that he changed the “label” some of his family can’t take it.

I think the topics the book brings up are important ones, not only the way Grady feels about finally being himself, even if he isn’t still sure who he truly wants to be, but also how his family takes the whole situation, as do the kids and teachers at school.

The thing about the book i think i liked the most is the fact that though  Grady wasn’t sure how and who he wanted to be, he still felt like a boy. I mean, he didn’t care about a lot of things that are *super macho* yet still, he really knew he was a boy, because you don’t have to be the extreme of something to be it.

There’s a little romance in the book and when i say little i mean it. Sure Grady has a girl he likes and all, but it isn’t a book about romance really and it gets pulled aside for the most. Friendship and acceptance are more important.

I’m not a 100% sure of how real the characters felt to me, but i gotta say i did like them, Grady, Eve, Sebastian… they had something that made them especial and so even though i couldn’t see myself in them i was rooting for them all the way through the book.

You won’t be finding here the greatest writing ever, i think it was rather rudimentary, but it’s kind of good for younger readers i guess. I think, the book has a lot of insight aboutt he topic, especially for kids trying to understand themselves.

I gotta say i read some reviews that said the book was a little stereotypical, and it may be a little true, but it doesn’t take the good things the book had.