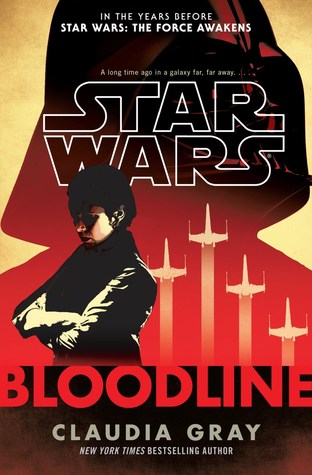 Summary: When the Rebellion defeated the Empire in the skies above Endor, Leia Organa believed it was the beginning to a lasting peace. But after decades of vicious infighting and partisan gridlock in the New Republic Senate, that hope seems like a distant memory.

Now a respected senator, Leia must grapple with the dangers that threaten to cripple the fledgling democracy—from both within and without. Underworld kingpins, treacherous politicians, and Imperial loyalists are sowing chaos in the galaxy. Desperate to take action, senators are calling for the election of a First Senator. It is their hope that this influential post will bring strong leadership to a divided galaxy.

As the daughter of Darth Vader, Leia faces with distrust the prospect of any one person holding such a powerful position—even when supporters suggest Leia herself for the job. But a new enemy may make this path Leia’s only option. For at the edges of the galaxy, a mysterious threat is growing. . .

First of all, the fact that it was a prequel to The Force Awakens had me really excited and i was really looking forward to read it.

In this book, we meet an older Leia (than the one we know from previous movies) and we get to see her as a senator but also, we see how much she wants to come back to the rebel days when she had missions and risked her life.

There are a few storylines in the book that eventually become one and the same, which i really enjoyed, thou at the beginning it felt as little stories that just went one after the other for no real reason… a look closer to the story being told will reveal something much deeper than that.

I felt a little too neutral about the characters, or at least about most of them in the book, especially about the new ones. Some parts of their storylines and backgrounds felt a little rushed, but nothing that can’t be overlook for the sake of the story as a whole.

I felt a little disappointed that we didn’t get to see Luke or Ben Solo in the book, even if they were mentioned, especially Ben. Mmm,

Mmm, i know it’s on purpose because there’s so much mystery around what happened that made Ben rebel against his uncle, but still, there was a major event that i wished we could witness Ben’s reaction to it. Still, i have hope we may see that on the movies or some new book that may come our way someday.

The writing style was neat and clear, nothing out of the ordinary, to be honest, but it did it’s work in the best way possible. I enjoyed it very much actually.

I know this book isn’t for everyone, but if you are into Star Wars you may want to check this one out since it has interesting information that may become important in the saga as it unveils.

I had to mark a lot of stuff that seemed like may be important at some point, luckily my copy of the book was in my kindle, because i had to write on it.

Anyway, a fun reading, … being this the first Claudia Gray’s book i read, i think i may check out some of her original works, i do own some of them, so i may really soon be talking about her books again.