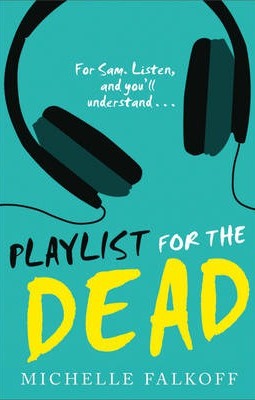 Playlist For The Dead by Michelle Falkoff

Summary: Here’s what Sam knows: There was a party. There was a fight. The next morning, Sam’s best friend, Hayden, was dead. All he left Sam was a playlist of songs—and a note, saying that he took his own life. But what Sam doesn’t know is: Why?

To figure out what happened, Sam has to rely on the playlist and his own memory. But the more he listens, the more he realizes that his memory isn’t as reliable as he thought. Especially when someone claiming to be Hayden starts sending him cryptic messages and a series of violent attacks begins on the bullies who made Hayden’s life hell.

Sam knows he has to face up to what happened the night Hayden killed himself. But it’s only by taking out his earbuds and opening his eyes to the people around him—including an eccentric, unpredictable girl who’s got secrets, too—that Sam will finally be able to piece together his best friend’s story.

And maybe have a chance to change his own.

I bought this book on a whim last year, and i didn’t really know if i’ll ever get to it, but since it’s Mental Health Awareness month i felt it was the right moment to read it.

The book is about Sam who just found his best friend dead. Hayden committed suicide and just left a note to Sam, to listen to a playlist and so he would understand. To this very moment, this still doesn’t make any sense in my mind. Anyway, through the book the chapters are named after the songs in the playlist.

The story it’s pretty straight forward, kid kills himself, and now we get to see the aftermath.

The story was well developed, all the mystery behind the death was well worked up, i was so interested in knowing what really happened, that i just couldn’t stop reading. The characters were interesting, though, some of their characteristics felt a little unreal to me for some reason.

To be honest, as much as i enjoyed the book, i felt like the main character, Sam, didn’t show much emotion because of the death of his best friend, or even because he was the one to find him. Like, he was pretty cold all the time, it felt really odd to me.

I think the story of all the bullying was on point to the very last moment, it made sense to me, and it felt like something that could really happen.

The thing that annoyed me the most about the book was the who was to be blamed for the suicide. The main character had some ideas, and in the end he came by a “solution” to it, that i don’t agree with at all. This made the book lose a little of the credibility i gave to it, but i think we can all come to our own theories, i just don’t agree with the one the author gave.

The story is, really gripping, i mean, there are some flaws to the story and some moments that felt a little forced to me, but it’s an interesting reading. I saw many people comparing it to “Thirteen reasons why”, but i haven’t read that book yet, so i cannot really comment on that.

After finishing the book, the first few hours i felt like the book left me with some stuff to think about, but as the time passed by, i feel like i was left with nothing, really.

Would i recommend the book? Well, i’ve read better about the topic of suicide, but i think it’s a good book to start with, because it isn’t very depressing and it has a positive light to life after a tragedy for the people left behind.

So yeah, why not? Give it a chance, you may like it…

3 thoughts on “Playlist For The Dead by Michelle Falkoff”