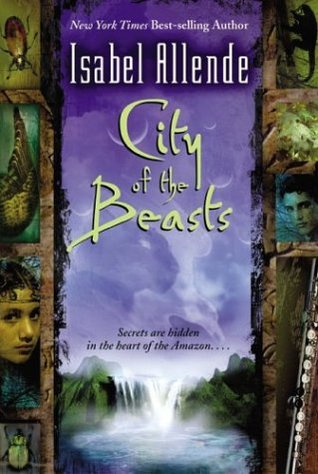 City Of The Beasts (Eagle and Jaguar #1) by Isabel Allende.

Summary: Fifteen-year-old Alexander Cold is about to join his fearless grandmother on the trip of a lifetime. An International Geographic expedition is headed to the dangerous, remote wilds of South America, on a mission to document the legendary Yeti of the Amazon known as the Beast.

But there are many secrets hidden in the unexplored wilderness, as Alex and his new friend Nadia soon discover. Drawing on the strength of their spirit guides, both young people are led on a thrilling and unforgettable journey to the ultimate discovery. . . .

Well, this is a difficult review to make, for once it was the first book i managed to finished since Half Lost at the beginning of the month (which left me with a huge slump) on the other hand…. i wonder how did i manage.

Oh, magical realism, i think it used to be a big think among Latin American writers it’s sort of fantasy but believable enough to make you wonder about life, which i find to be incredible. The book starts pretty real, a boy living his life in North America, happens to be thrown upon a

The book starts pretty real, a boy living his life in North America, happens to be thrown upon an amazing adventure with his grandma in the Amazonas.

I wasn’t thinking much of what could happen in the book when mystical and magical stuff struck me in the face. To be honest, the magical stuff mixed with some real believes and folk from the Amazona’s natives made it all so colorful and interesting, i was wondering how much of the folk presented in the book was actually ‘real’.

The way the story is written it’s very satisfactory, the author has such a way with words, you totally can see the things she is describing, all the time. The characters, the jungle even the magic, all feels real.

The story told is fresh and attractive, i haven’t read any books about native folk and such, so i found it to be exciting and different.

The one problem i had with the book and for me made it lose the stars to get 5 was the facct that at some point, in the middle of the book there are so many descriptions that i lost myself and wanted to quit reading because i was getting  bored.

Anyhow, i managed to read til the end, and somewhere about the last quarter of the book the narrative caught up and got extremely engaging again.

The characters are unique, and vivid. The life was pouring off them through the book which made the experience even better.

Overall, it’s a good reading, you just have to pull through the ‘boring’ part and you’ll end up with a great experience.

There are two more book to the series, which i’m not sure i’ll be reading, because it ended well enough, that i’m not sure there’s aa need for more adventures with these characters.

One thought on “City of the Beasts by Isabel Allende”