I received an arc of this book from NetGalley in exchange for my honest opinion, so here it comes! 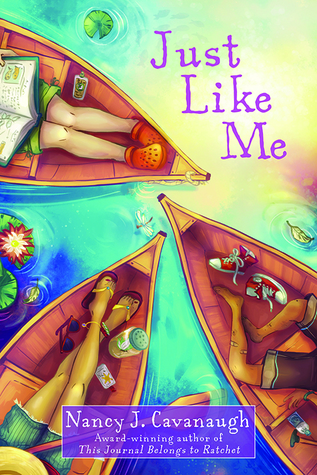 Summary: Who eats Cheetos with chopsticks?! Avery and Becca, my “Chinese Sisters,” that’s who. We’re not really sisters—we were just adopted from the same orphanage. And we’re nothing alike. They sing Chinese love songs on the bus to summer camp, and I pretend like I don’t know them.

To make everything worse, we have to journal about our time at camp so the adoption agency can do some kind of “where are they now” newsletter. I’ll tell you where I am: At Camp Little Big Woods in a cabin with five other girls who aren’t getting along, competing for a campout and losing (badly), wondering how I got here…and where I belong.

Told through a mix of traditional narrative and journal entries, Just Like Me is a funny, uplifting summer camp story about unlikely friendship and finding your place in the world.

This is a sweet story about a girl that cannot understand why people have to make such a deal of her being an adopted Chinese girl, why does it has to be such a big part of her, why can’t people just see her as her parents’ daughter.

In my opinion the main character’s voice felt very true and mature, even though the character is only 11 years old. I liked her character and the way she sees the world.

The camp is a nice setting for the story. In camp and by confronting a different reality she is finally able to learn not only about her true feelings about many aspects of her adoption and her “friends”, but the nature of friendship, listening and understanding the others’ motives to act like they do.

The only real development we really see is Julia’s, but i think that if all the characters were treated as Julia, the book would be too dense for children. The way the other characters develop, though we don’t get the actual thoughts, it’s enough for the book.

The book has a good pace, and although it’s a short book but it doesn’t feel rushed. I enjoyed reading it very much, and i think it’s a great book kids. The main character speaks truly as a kid, in words and in a dept enough to speak about the emotions and the issues being treated in it and still maintaining a child level of understanding.

Something more, i really liked the little journals Julia had to write and the way you can see her changing with each one of them.

In conclusion, a good recommendation for kids in middle grade and maybe a little younger.

One thought on “Just Like Me by Nancy Cavanaugh”