Basically, do you know the character Sheldon Cooper from the Big Bang theory? Do you know why relentless he is about human contact? (Mostly on earlier seasons) well, that’s how I roll.

And yet when it comes to fictional characters i go berserk.
Honesty, i obsess over fictional relationships, i get invested on so much that if people who know me irk would know it would change the way they looked at me forever.
There’s a sort of insanity, that I’m not quite sure if it’s just the Fangirl way or if it runs deeper in my veins or something. It’s ridiculous I swear.
If i ever invested half the time i do on thinking about my otps (one true pairing [s]) into a real relationship, I would get an award for being the best girlfriend in the universe.

No, not really, i don’t like people around me at all, and don’t get me started on people touching me, that’s just wrong. So wrong.

But to be honest, i think we live in a time when these kind of behaviors aren’t the weirdest things you can find. So, i spend my time and emotions on fictional relationships and everything is fine.

As being a shipper [and a fangirl] is a way of living, i’ve been fangirling over my favorite ships since i was very young. Like, when i was about seven or eight i would watch anime and ship many ships (even though at the time i didn’t know it was shipping). the Goblet of Fire for the first time. I remember how much i got crazy about Viktor Krum getting in the middle of Hermione and Ron, how much it bothered me at the time. Yeah, my first OTP (which i carry to this day) was Romione, although i didn’t call it that until two years ago.

I still ship them very much, i even remember being very nervous when the last book got out, because until the books weren’t over there was still the chance that my ship wouldn’t happen, i may even have prayed at some point, i’m not a 100% sure.

Since that first ship, i had a lot (and i mean A LOT) of OTPs, when normally i’ll have only one in a particular fandom, i’ll still have some other that i ship (just not that much).

For some reason i prefer canon ships, or ones that may be canon at some point, mostly because my fangirl heart struggles too much when i have to make it all in my head. But yeah, i had some crazy ships…

Well, yeah, at some point i totally shipped Tomoyo and Meiling.

And i say shipped, which is weird, because normally if i shipped it at one point, i’ll ship it for eternity, i honestly don’t remember why i stopped shipping them together. If i decide to ship a ship it’s for good, but there are a very few i had to drop just because it was too impossible or something ruined the ship for me. Something like the actors interpreting the characters being horrible people in real life, or too much against the ship … yeah, i also won’t ship real life people…

Anyway, obviously it’s impossible to have so many OTPs and obsess over them the same amount all of the time, so, i obsess over one particular ship (like most of the day) the same way i’ll obsess over a show or book (and the OTP normally will be of that same tv show/book) while i’ll still obsess a bit (much) over other OTPs.

At the moment the ship i’m obsessing the most over is Shamy from the Big Bang Theory, which means i’m watching and rewatching the show all day over these days.. (yeah, my capacity of rewatching and rereading stuff i love is remarkable, i’ll talk about that one day). 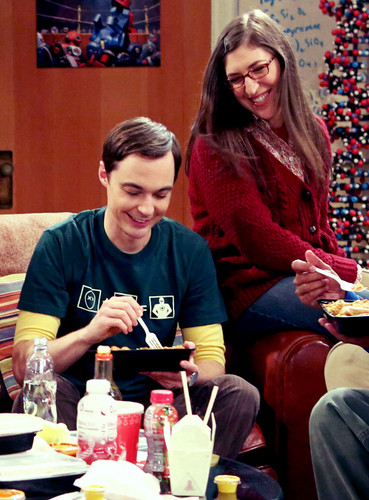 Because i have so many OTPs, and a very short attention span, i’ll be talking about my ships in short entries, …

Oh wow, what a way of saying that with this entry i’m presenting a new “segment” on this blog, apart of the nonsenses i talk about on a monthly basis, i’ll be adding the “confessions of a shipperholic” from now on…

So, for today this is all..