I never thought much of a bucket lists, apparently many people have them, but i never thought i needed one…or had one for what it matters, although i guess i just saw it a my tbr list (?).

A few weeks ago i went to a Cirque Du Soleil show – “Quidam”. When i was waiting for it to start i remembered how much i’ve been willing to see one of their shows… so many years longing for it. While sitting there, it popped to my head that would be something to cross off my bucket list, … and then rewrite it there because i have to go see them again.

What a magical evening it was. I mean, my inner child was in tears the whole time. I can’t remember the circuses i’ve been in before, something with dogs in parachutes, the Moscow Circus (?). Don’t really know, i only remember a puddle being thrown by someone to the ground. … Anyway… The Cirque Du Soleil show was nothing i could ever dream, it was just so freaking amazing. Those people, the performers  (all of them; acrobats, actors, musicians) are so talented, all of them. Tears, i was in tears (of joy of course).

Being in the first row (i couldn’t believe it!), seeing their faces for real, not from afar imagining them (not at all), seeing their muscules shaking from all the work they were doing, it was amazing.

More than anything it felt as a surreal dream. A dream i wouldn’t mind having every time i close my eyes. It reminded me of movies such as Paprika. It was so weird, good weird, of course. There’s a peaceful, relaxing beauty on watching such talented performance in such a short time. You didn’t finished gasping about something yet anohter as incredible as that one already started. Man, those people are so talented, they are art, ART THEMSELVES.

I wish i could really describe in words my feelings for what i saw. It’s weird

because i could describe the acts here, tell you what i enjoyed (everything), but i have the feeling that describing, just describing it wouldn’t make it justice. This is something you have to see with your own eyes (or go home), because the feelings, the colors and the performance it’s too much.

So, instead i’ll talk about what catched my eye during the whole show, the talk i had with my sister (who accompanied me) after and my future plans…

Maybe i should start by giving  a little summary of the show;

Young Zoé is bored; her parents, distant and apathetic, ignore her. Her life has lost all meaning. Seeking to fill the void of her existence, she slides into an imaginary world – the world of Quidam – where she meets characters who encourage her to free her soul. 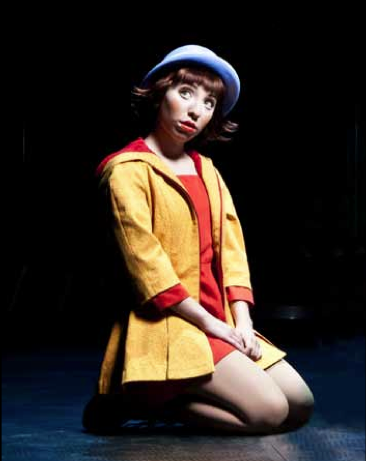 Quidam: a nameless passer-by, a solitary figure lingering on a street corner, a person rushing past and swallowed by the crowd. It could be anyone, anybody. Someone coming or going at the heart of our anonymous society. A member of the crowd, one of the silent majority. The one who cries out, sings and dreams within us all. This is the “quidam” whom this show allows to speak. This is the place that beckons – a place for dreaming and genuine relations where all quidams, by proclaiming their individuality, can finally emerge from anonymity.

So, there were two characters who i saw picking on  Zoe the whole time, John and Target. John was hillarious, Target was the cutest character to ever cute.

<Zoe with John and Target; respectively>

Okay, yeah.. Target was the character i found myself most drown to, he was most of the time at the back doing goofy stuff (he reminded me of a little boy or a puppy) , many times on a cage and although he was merely a part of the background my sister had to keep telling me to look at the main actm because i was staring at him instead.  So yeah.. he catched my eye badly. I could spend days just staring at this man doing so much cute stuff.

<the original planwas to buy another ticket to go to the show again, because i needed to watch it again, but it turned to be an impossibility>

So, as i started as an idiot (i’m sure of this) i enjoyed not only the main acts, but also the little things on the show. And by the end of the show Target was my bae (in my mind obviously).

Anyway, it was not as if he was the only thing i paid attention to (although a large amount of it was, it was pretty intense), i liked.. more like LOVED all the acts. I was surprised to discover my sister enjoyed the most the diabolos and jiggling acts. I never thought she could love those, but to be honest, i didn’t think she would love any of it, as i had to obligate her to come with me.

After the show when talking about what we saw, she described to me so many things i’ve missed, meanings and ideas i didn’t see, which felt weird to me (not to say awkward), i saw people being art, she saw meaning on everything. But i guess it’s kind of my sister’s thing, she studying art and creative design, so that’s something she should do .. (not all the time but.. hey, not my thing..)

As for my dreams…yeah, it’s not as if iwas running away to join a circus right now .. (that ship sailed away from me). But i always looked for wonder in life, and i gotta admit this reality thing we live in makes it difficult to find, and then sometimes, without really looking you find something really great, and it makes you happy even if just for a little time. That happened to me while watching the show, that evening. I won’t become an acrobat (for so many reasons), but i can go watch more of those kind of shows.

Technicaly the idea is to become a Cirque Du Soleil fangirl, next time i’ll be prepared! Not like this time, i just randomly saw the poster and remember how much i always wanted to go to their show, but my mom could never take us, so i just thought “wait, i’m a working grown up! i can buy a ticket myself!” and so it happened…

Now.. thinking of it… do they have fans? or is it just random people that happen to go to their shows? Do they have a fanbase? I guess i couldn’t be the only one that loved it so much, right? … I surely hope so!

Okay.. so, next stop; finding the Cirque Du Soleil Fanbase!

Wish me luck! see you next time!